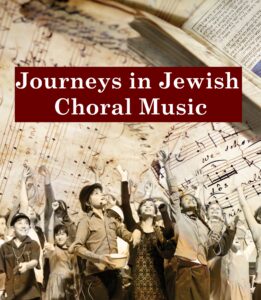 Journeys of hope and fear

Germany to Australia; Russia to South Africa, Finland and the USA; Austria to Britain. These are just some of the journeys taken by Jewish composers in the years immediately preceding the Second World War. Journeys of hope for a new start in a foreign land; journeys of fear for the future and the consequences of staying at home.

Undertaken within the frame of my AHRC-funded (£1.8m) ‘Performing the Jewish Archive’ (PtJA) project, the research published on this website charts the lives and music of five Jewish liturgical composers from the former Russian Empire.

By contrast, unable to leave the East, Dovid Ayznshtat (1890–1942) and Josef Gottbeter (1877–1942) were murdered during the Holocaust. However, some of their manuscripts survived, taken to Cape Town by Spektor and Katzin, whose descendants now house them.

David Nowakowsky (1848–1921) died well before the Second World War, but his music manuscripts risked destruction where he had kept them in Odessa, first in the wake of the increasingly violent pogroms that followed the Bolshevik revolution, and later at the hands of the Axis powers. Most of the composer’s papers were smuggled out of the country by his daughter Rosa around 1924, but the discovery of a number of them amongst the papers of Froim Spektor in his red manuscript folder (pictured below, right—now in the possession of Spektor’s granddaughter in Cape Town) suggests that at least a few more may still await rediscovery. 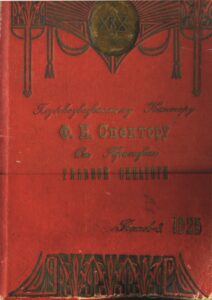 Relatively little research has been undertaken into the role of the (South) African Jewish diaspora in preserving musical archives. The recovery and restoration of these works, once presumed destroyed or lost to obscurity, will thus enable a re-evaluation of the musicians in question, their compositions, and the professional networks and interpersonal relationships that they maintained despite their widely dispersed locations. They also hint at far deeper connections with a broader community of non-Jewish composers than hitherto recognised.

PtJA provided a risk-tolerant structure within which archives could be traced speculatively, and at any stage the work could have foundered. The research involved (i) historical and community work, building contacts for (ii) ethnographic fieldwork, to gain access to (iii) (privately held) archival musical sources, which were (iv) transcribed, edited, and reconstructed leading to (v) performances, bringing previously obscure or unknown musical heritages into the public domain.

Performance at / as the heart of the research

As a performer and a musicologist, I strongly believe that performance lies at the heart of research of this nature. If history teaches us anything about the malevolent intentions of the Nazi regime and its quest to destroy all traces of Jewish life and culture from existence, then it is that the music of those who survived, and even more so of those who did not survive, must be heard. Only by continually rediscovering, reinterpreting and reinvigorating these precious remnants of a world that was all but lost can we drive home the message that, despite the six million and more who were murdered, the Nazi project was ultimately a failure.

The transformative power of performance becomes an act of research in its own right: it leads to new understanding regarding the unique sound world and the technical accomplishments of Jewish musicians faced with the high likelihood of their own extermination; it offers a pathway toward comprehending the almost intangible emotional affect that the music in question—often apparently ‘simple’, even ‘simplistic’ by some accounts—actually conveys; and it opens the door to the possibility of co-creation, co-discovery, and the generation of new research questions and responses in partnership with a public for whom the often casuistic intricacies of archival theories, manuscript studies, cultural theory and editorial principles can sometimes appear all but impenetrable.

For this reason, PtJA’s multiple performances (the c.80 hours of video available via the project website exclude many performances that were not captured) formed a central research fulcrum around which the other complementary research elements pivoted. Performances were contextualised by public lectures, rigorously researched programme-notes, interactive conversations between researchers, audiences and performers, and a substantial exhibition that appeared at nearly every performance around the world, and which disseminated the project’s cutting-edge research to some 10,000 people. Additional performances were broadcast by the BBC from Wigmore Hall and presented at the UK Parliament’s 2017 Holocaust Memorial Day event; others took place in smaller, less auspicious settings (local synagogues, music societies, evening classes, etc), for a total audience probably in excess of 100,000.

The week-long international festivals that took place in Madison, Wisconsin; Leeds and York; Prague, Pilsen and Terezin; Sydney; and Cape Town formed not only a peak towards which preparatory archival, ethnographic, editorial and similar activities built, but also gave rise to important moments of realisation, enhanced understanding, and heightened empathy that could only be achieved through the act of performance itself. Crucially, those moments of liminality often stimulated new, ongoing questions regarding (for example) the creative impulse of musicians in the most extreme circumstances, the role (even the desirability) of contextualisation for a fuller understanding of the music being performed, ethical questions surrounding the staging of performances out of religious context, perhaps by non-Jews, and many other questions besides.

I would like to acknowledge the support (financial, practical, emotional and intellectual) of all the individuals and organisations without whom neither PtJA nor (most pertinently in this instance) my continued research in this area would have been possible.

About the author of this site